York is one of eight areas taking part in, ‘Bags of Creativity’, which will distribute 8000 bags to children and young people in Yorkshire and Humber. Each bag includes 60 creative activity postcards and a range of arty materials. See more here.

I provided the following three postcard designs to be included in these #bagsofcreativity. 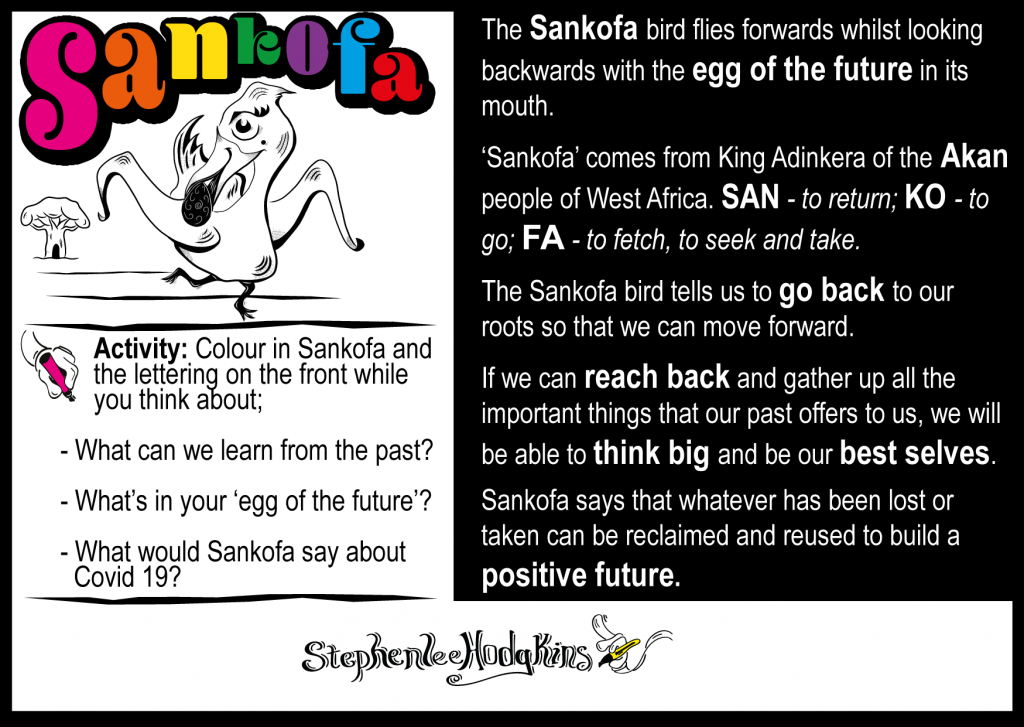 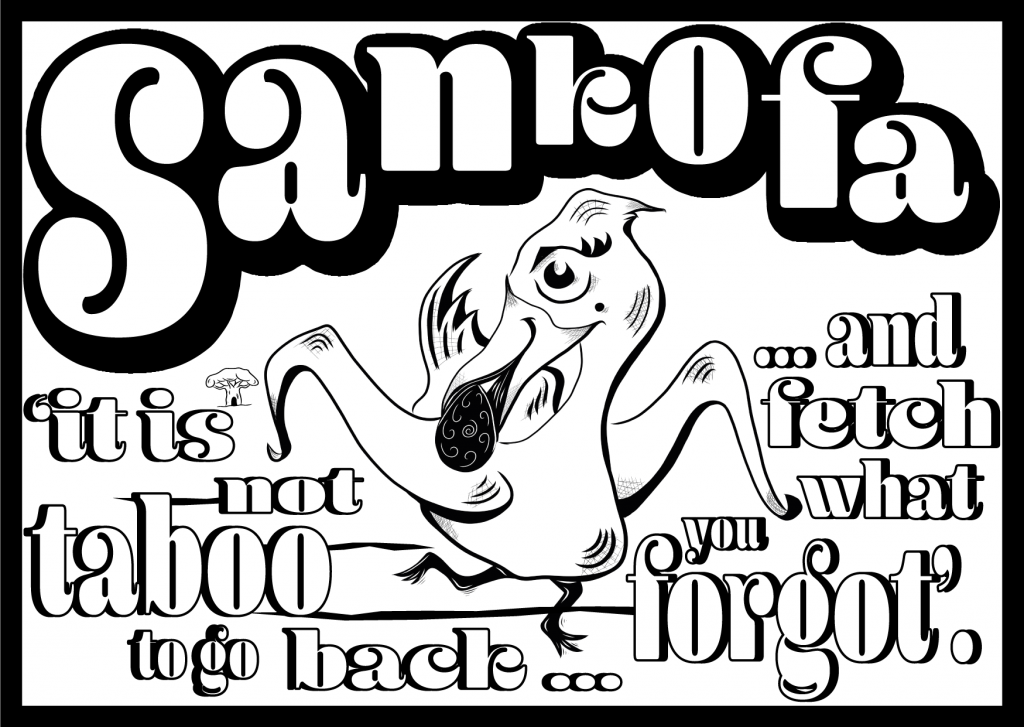 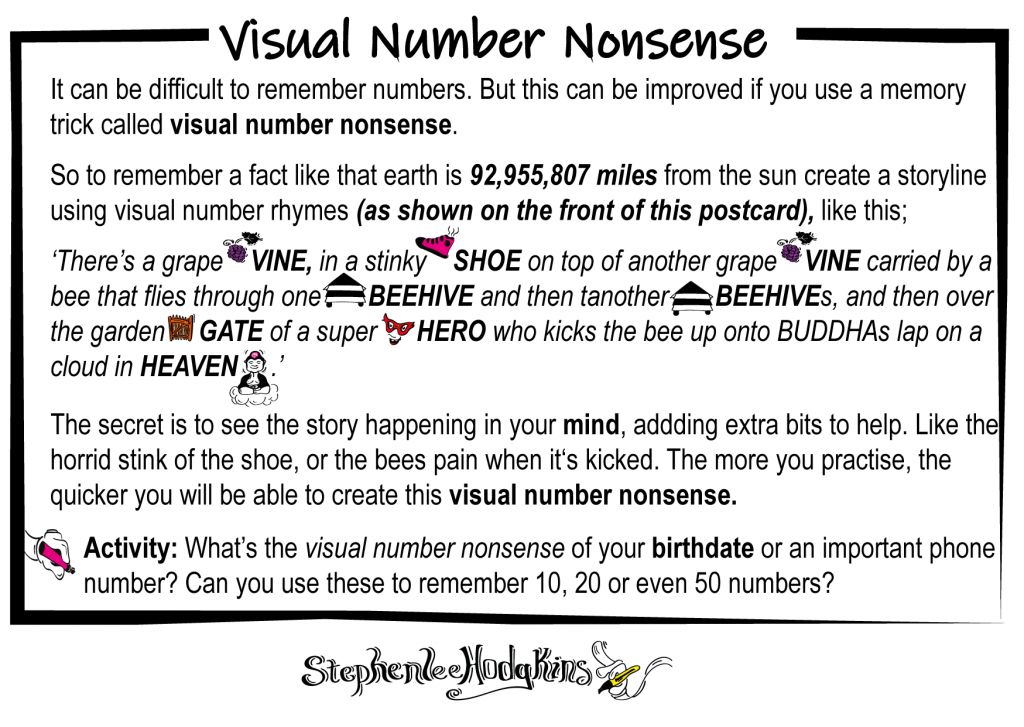 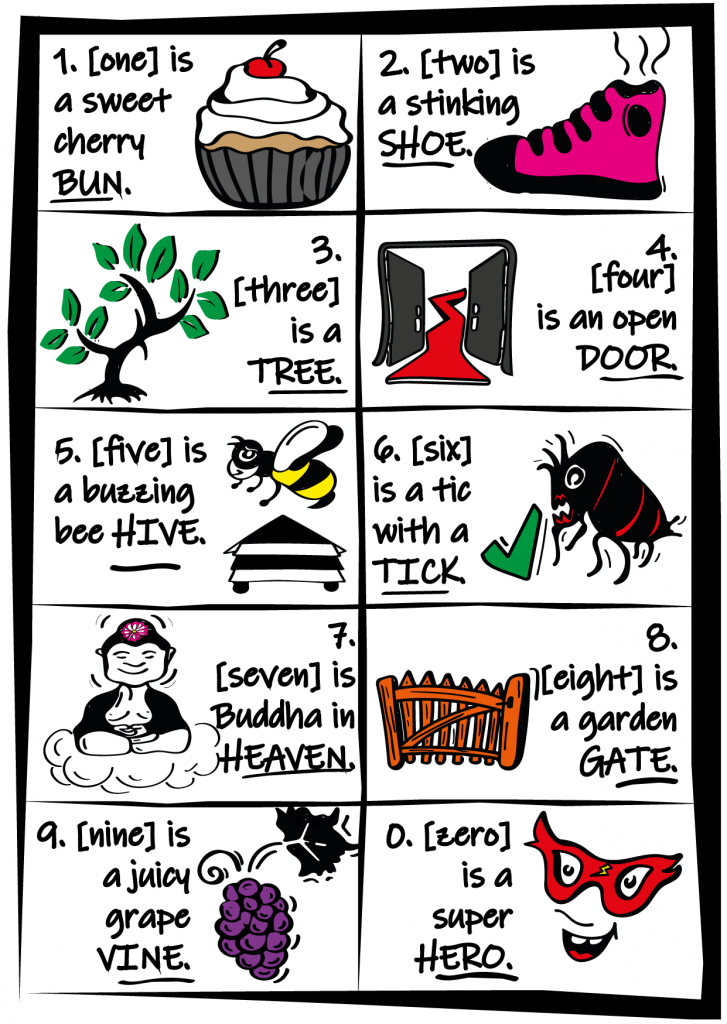 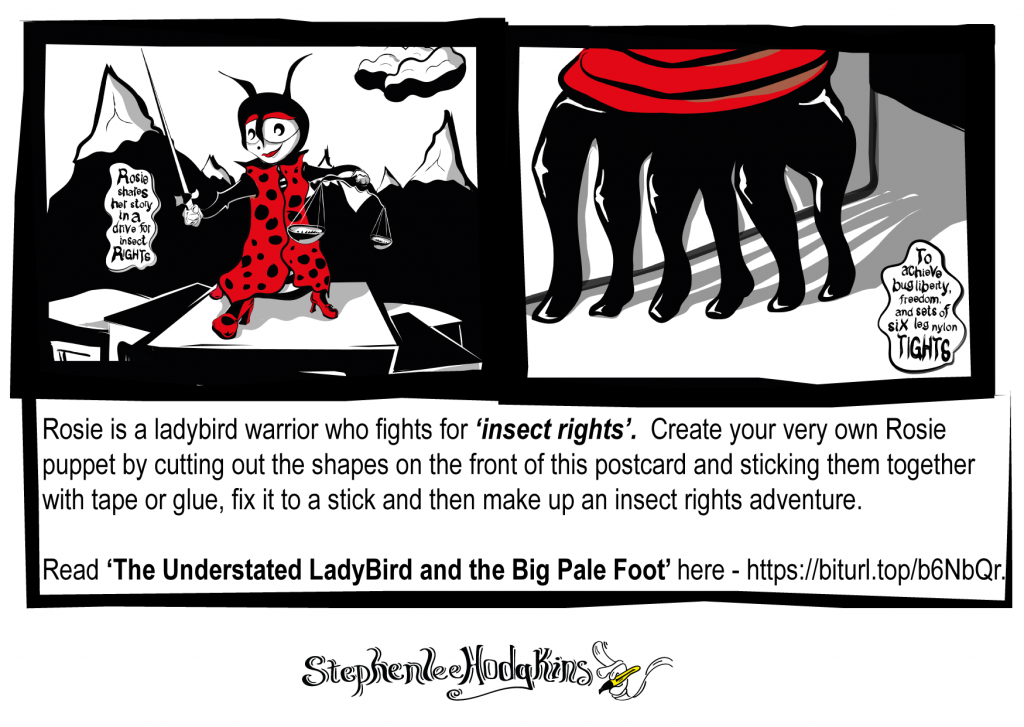 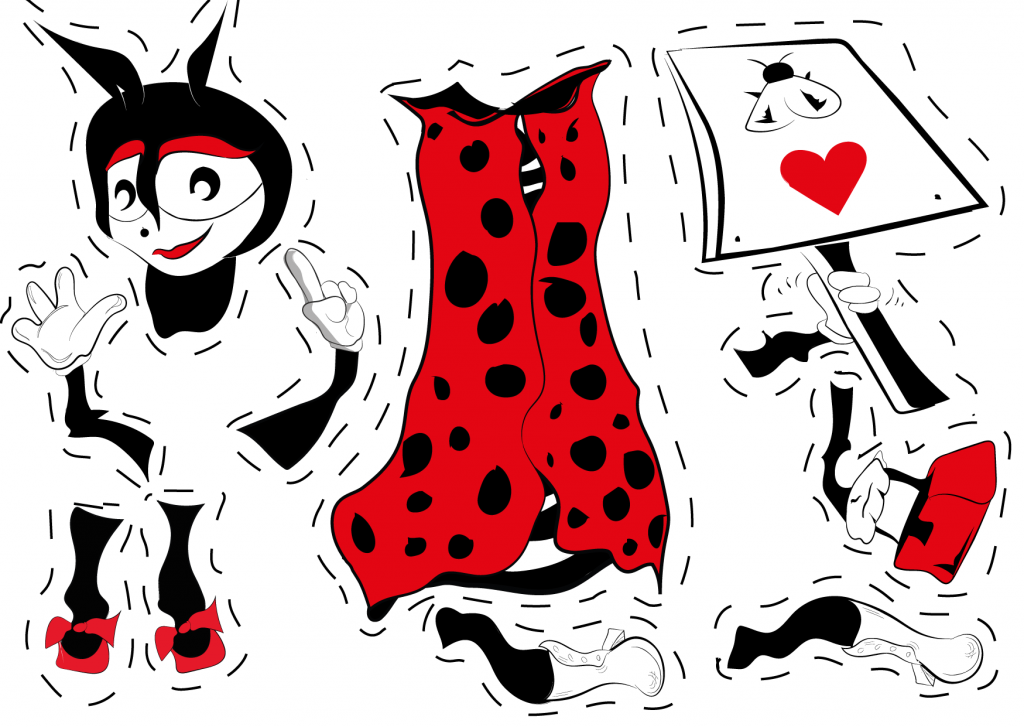 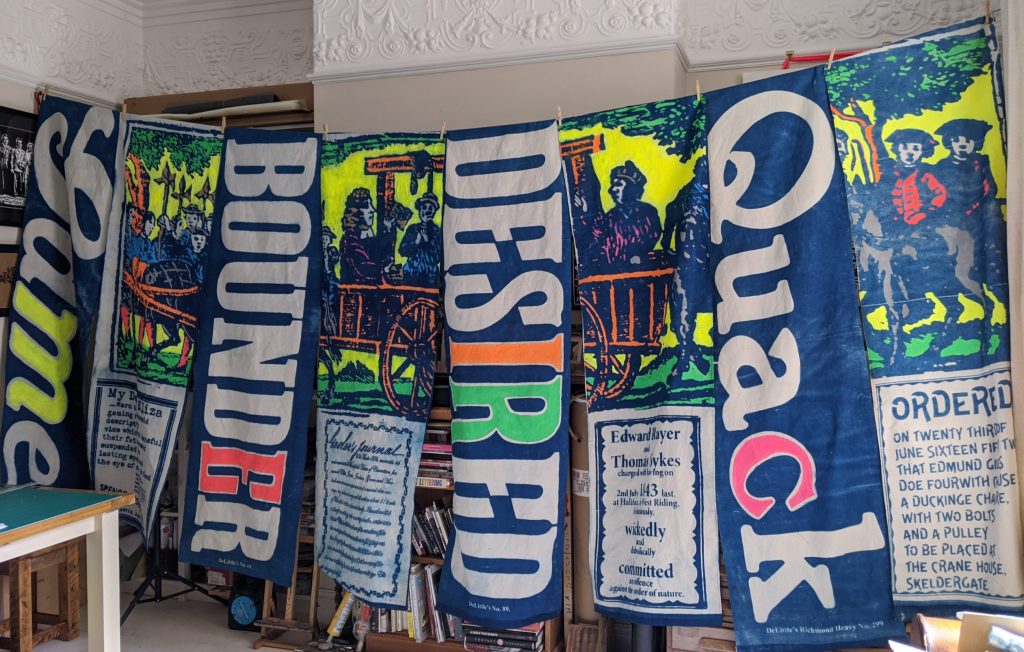 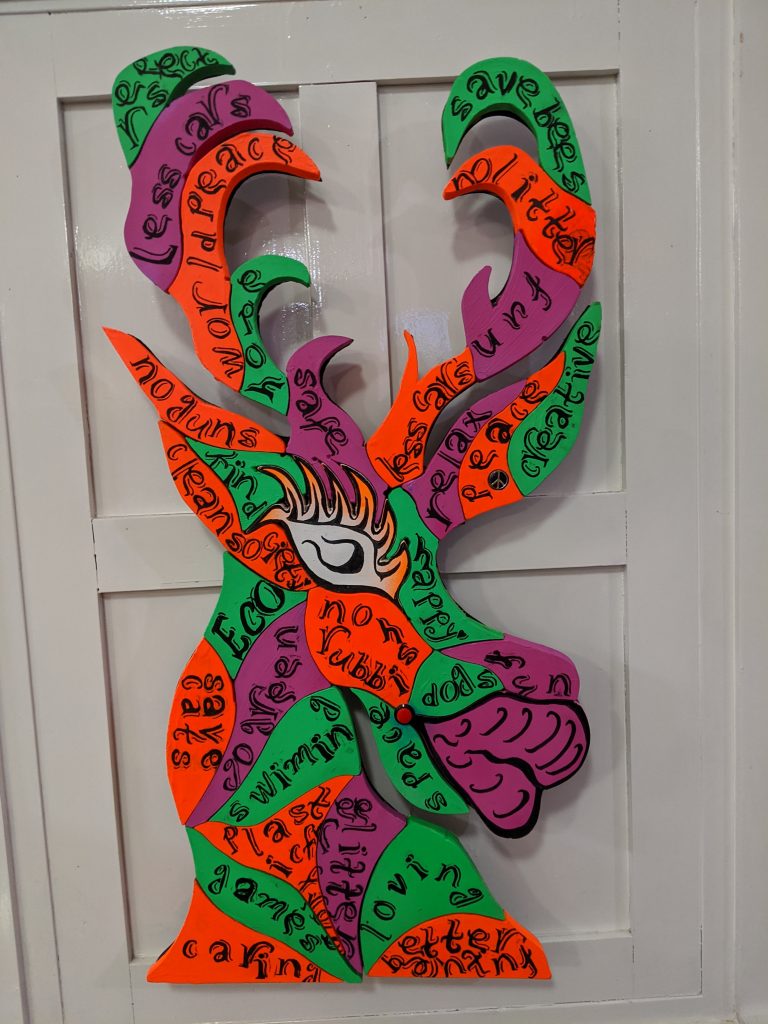 The children gave responses that are both thoughtful and hopeful. They then read and audio recorded these words, which can be heard in random order at the press of the red button.

The ‘Reindeer’, ‘Magpie’ and ‘Ox’ were previous pubs in The Groves area which were mentioned by interviewees in a recent ‘consultation and oral history’ report commissioned by the City of York council as part of the current Groves regeneration project.

The plan is to create further pieces of a Magpie and an Ox with others in the Groves, and from this work up an Aesops fable style story based on these characters, imagining positively as we do so what sort of community future we want.

Recently I worked with the Joyful Connections group who meet at St Luke’s Church in Burton Stone Lane.  Together we created the following lino cut portrait ‘group print’ piece. 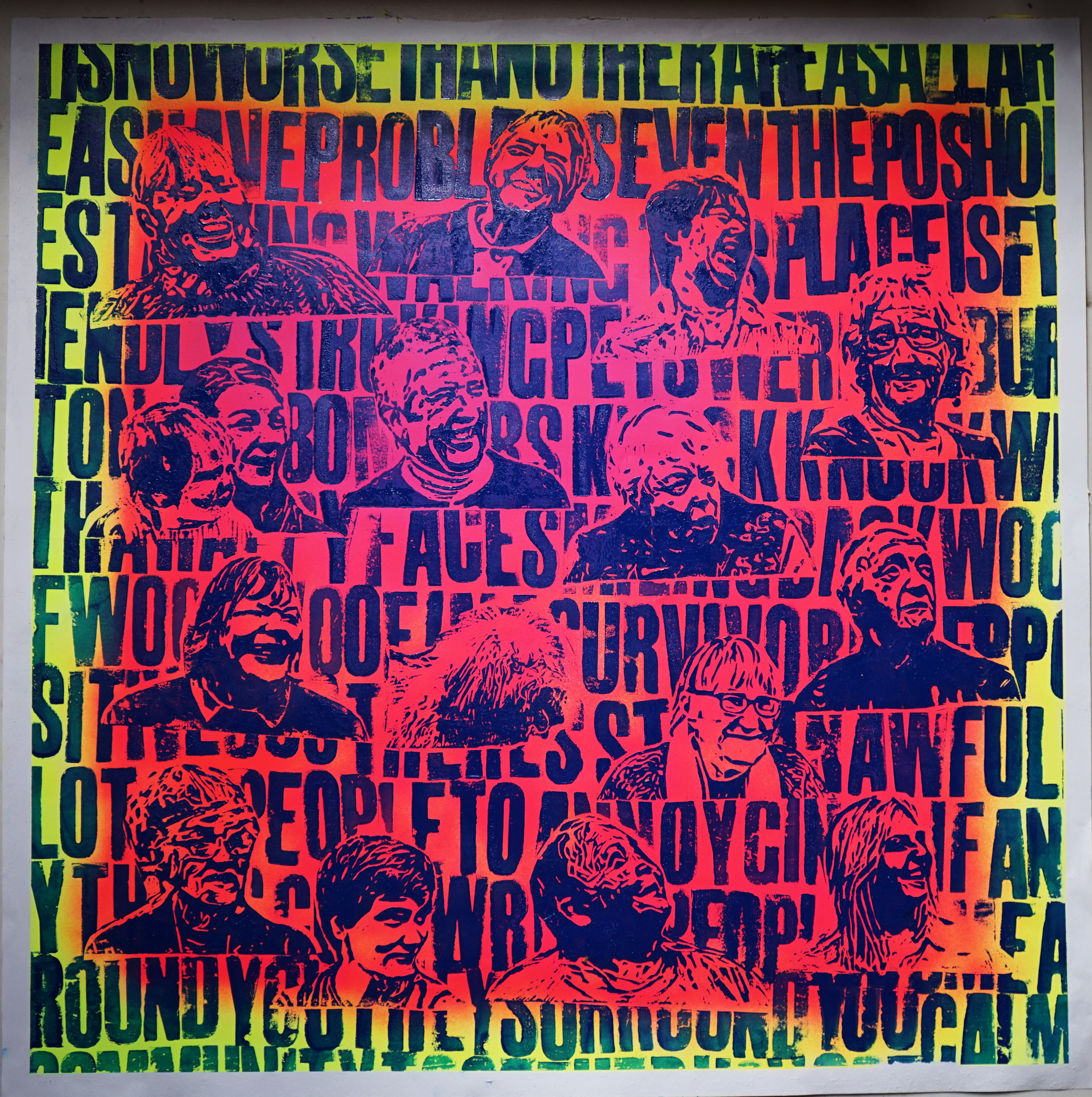 Beginning with smiley photos we digitally traced and transferred the images onto lino.

Next while chatting about ‘what makes us happy and well?’ We carved out the faces in the lino.

Once carved, on a large and colourful sheet we printed the happy faces. 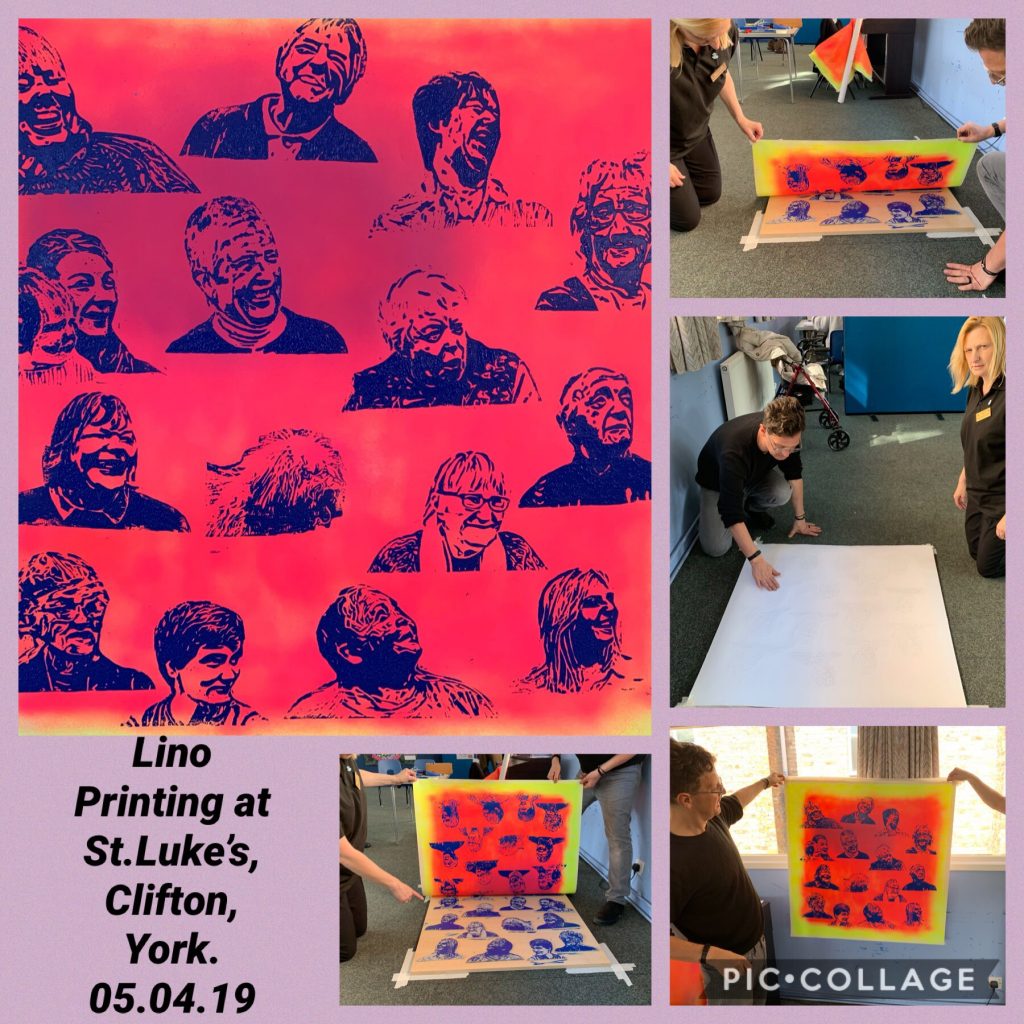 Then using a old wooden typeset, from the Delittle wood type foundary of York, part of the things we said while chatting about ‘what makes us happy and well’ were printed around the faces. 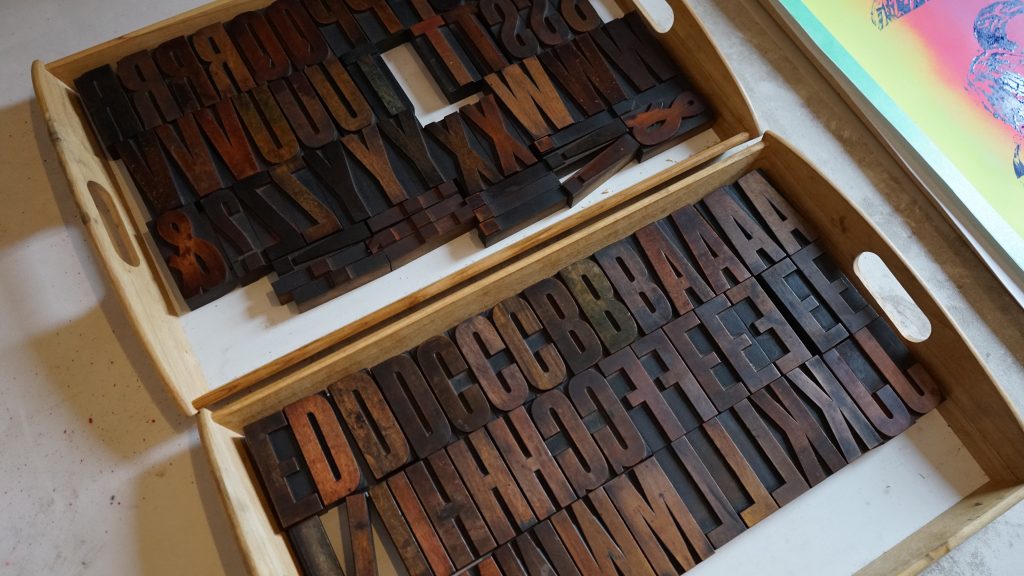 This includes things like ‘this is a friendly place’, ‘if anything goes wrong, people come round you, they surround you’, ‘I keep positive, cos there’s still an awful lot of people to annoy’ and ‘there’s a strong sense of comradeship, community here’. 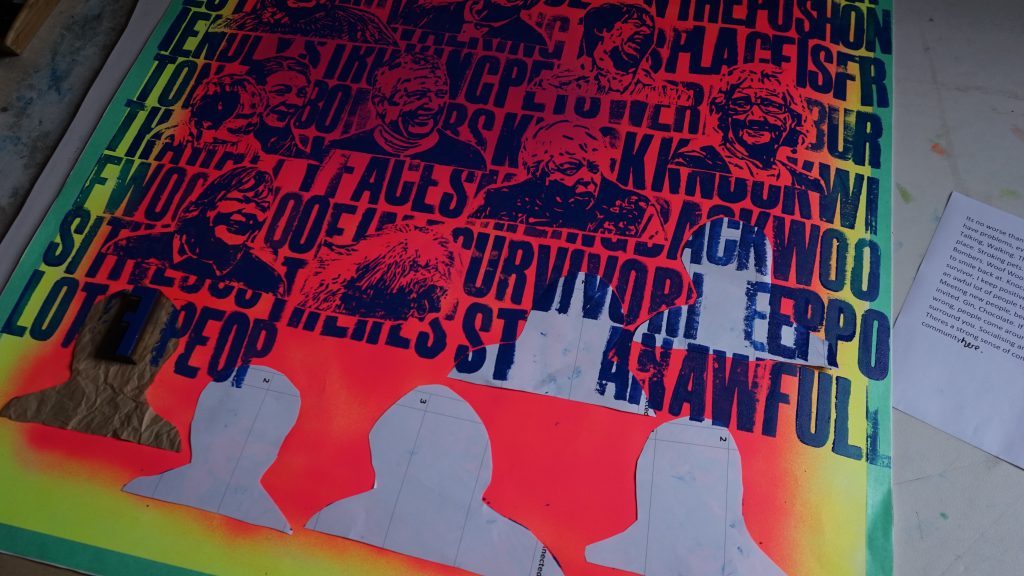 Then once dry, the piece was framed for the group. 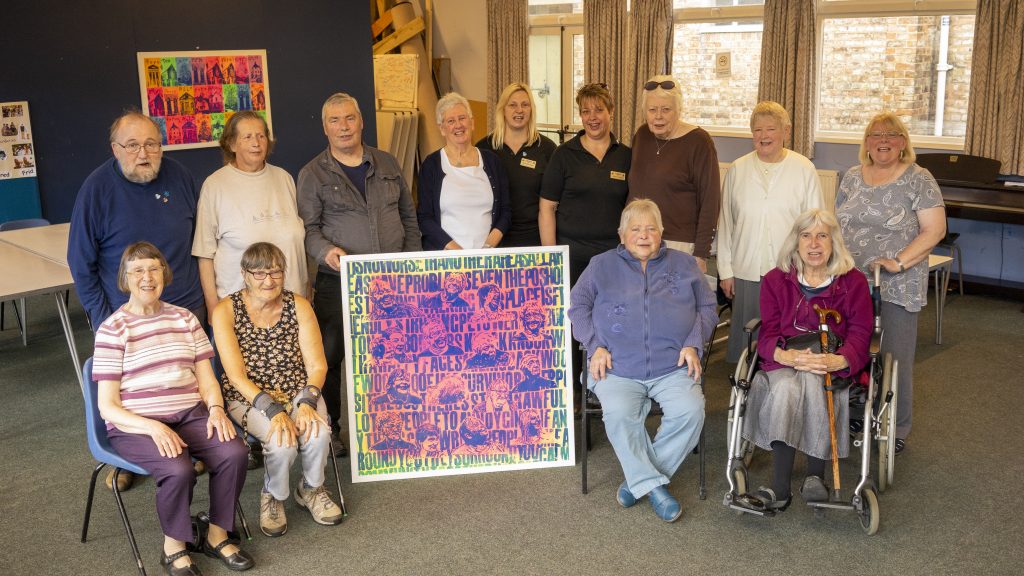 Joyful connections is a cracking group. Such a remarkably happy and supportive network, for more details of them see here.

As part of  ‘York’s Dead Good Festival’ and ‘Dying Matters Week’ 2019, I facilitated a group doodle in the reception of York Hospital.  This clip from ‘That’s York’ explains a bit about it all.

And here is the final doodle.

In March 19, I was fortunate enough to have an interview for the role of ‘York’s Town Crier’. While I did not get the job, part of the interview process was to prepare a ‘cry’, and so this is what I said, quite loudly outside the council office one cold friday in March . 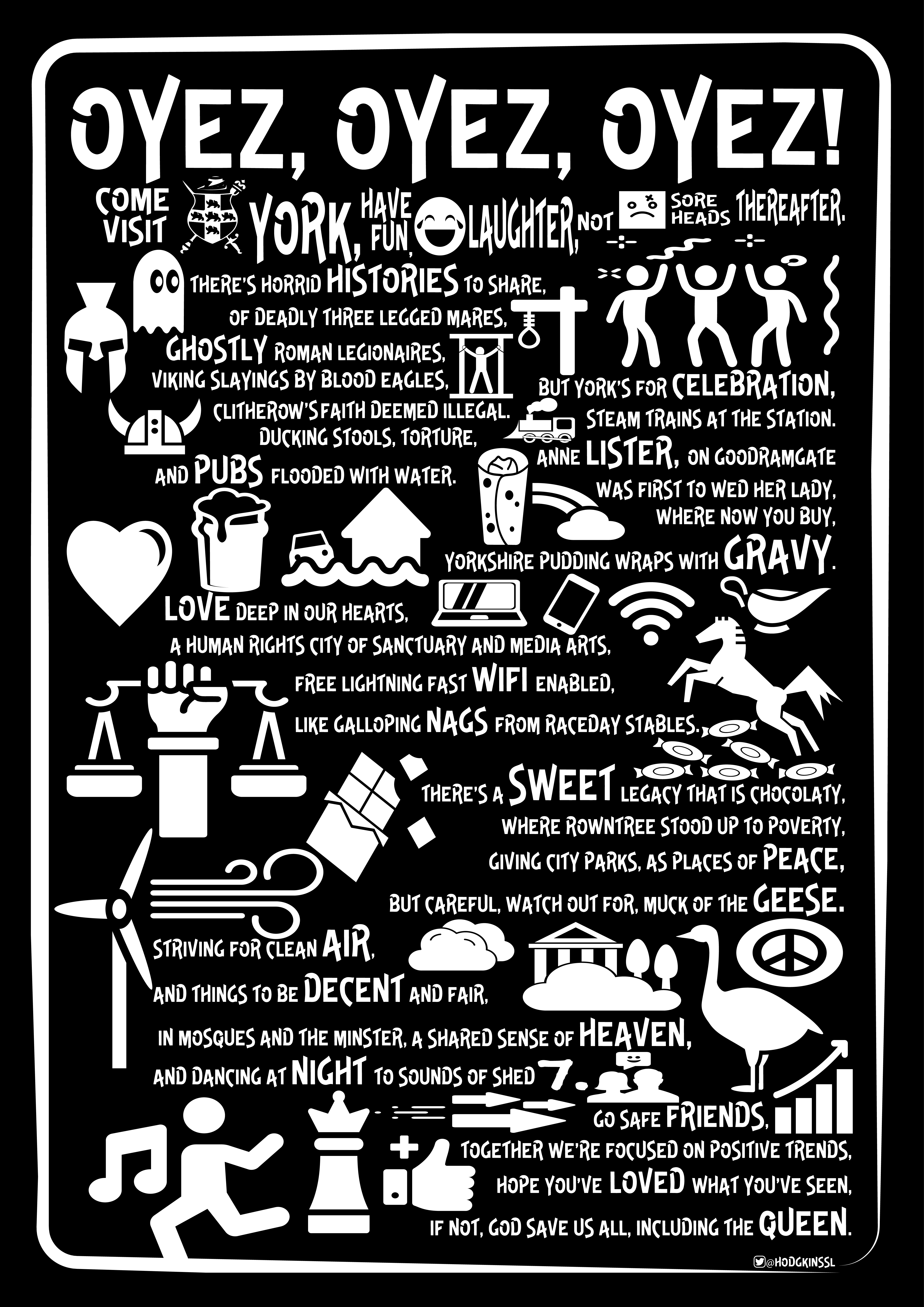 A pdf version of the above is available here too. 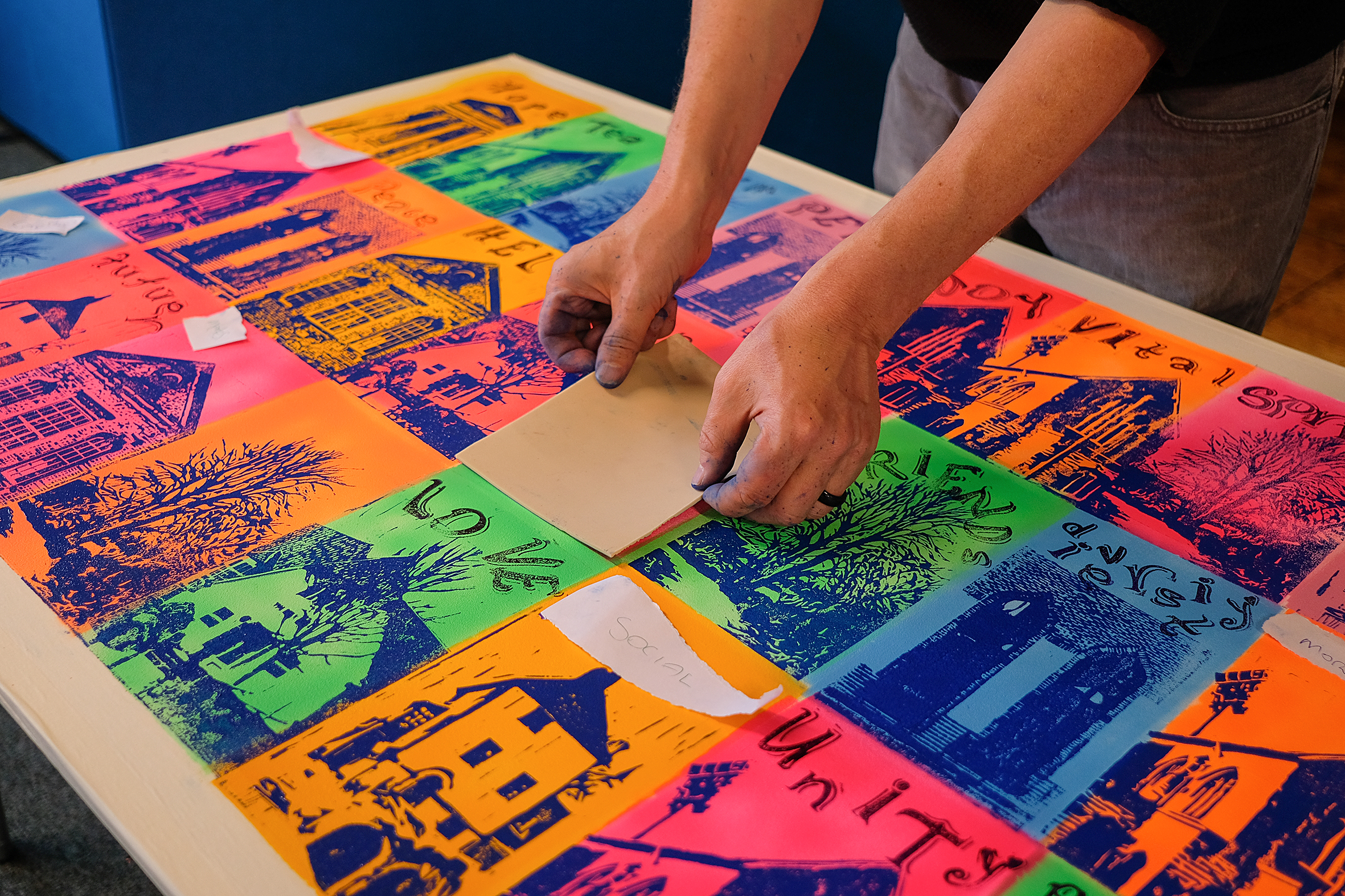 Group print is a fast paced low tech participatory method that can help capture the experiences and perspectives of a place based community. The approach values and emphasises the importance of everyone’s involvement, and combines place based icons with emotive key words from participants, in response to questions like what is community? Or what does the library mean to you? Group print creates co-produced art pieces that capture everyday diversity as well as highlighting the social interconnectedness of people and place.  The above images show the process and end results from previous group prints I have been part of.

Made as part of York Disability Pride 2017 celebrations, this short film remembers Lynn Jeffries who played a key role in setting up York Independent Living Network (www.yiln.org.uk). Lynn Jeffries was a disability rights campaigner in York. She made a significant contribution to equality and inclusion work in the city. Lynn passed away aged 58 in August 2014. This film includes some memories from people who knew and worked with her. END_OF_DOCUMENT_TOKEN_TO_BE_REPLACED

I’m currently working with Explore York  as part of their celebrations to mark their 90th year.  At the anniversary event on 23/09/17 I  asked people to give me 90 words for the 90th year of this wonderful library. More specifically, on a large sheet with a doodle of the building in the middle of it I asked;

‘What does Explore mean to You?’ END_OF_DOCUMENT_TOKEN_TO_BE_REPLACED