Here’s a selection of my recent work including, linocut prints, cartoons and animations.

Kiosk, 25 linocut prints (46x61cms), 1 hand (1 x 0.75 mtrs) 2018
After WWII Grandad Kirby worked for the Corporation of London collecting coins from parking meters. He liked taking and collecting photographs. Kiosk is based on a photo he took in the 1950s of woman working at Aldwych Underground station.
Stars in Time - 5 linocut prints (A0), 2020
Inspired by a photo of the Astronomical clock face at Hampton Court Palace following its repair in 1947 with my great grandfather Christopher Kirby and his colleagues from Thwaites and Reed clock manufacturers.
Scaffolding at St Pauls, 25 linocut prints (46x61cms), 2019
Scaffolding at St Pauls is based on a photo Grandad Kirby took in the 1950s.
Still Life at Bank - 25 linocut prints (46x61cms), 2019
Still Life at Bank is based on a photograph Grandad Kirby took in the 1950s of someone who with their worldly possessions was sleeping in a doorway of the Bank of England.
Getting Wed - 25 linocut prints (46x61cms), 2019
Getting Wed is based on a studio photo Grandad Kirby had of his brother Christopher’s Kirby marriage to Edith Vandeau in Hackney, East London in 1925.
The time is now 25 A4 prints linocut and letterpress
The Time is Now is inspired by the silver half hunter pocket Grandad Kirby inherited from his father Christopher Kirby.
On the beach - 25 linocut prints (46x61cms), 2019
On the beach is based on a professional seaside photo from the 1920s Grandad Kirby had that includes members of my grandmother family, The Wells’.
Seventies Single Mother, 25 linocut prints, (A5), 2020.
Cow Sixty Six, 25 (A5) linocut prints, 2020.
Based on a photo Grandad Kirby took whilst on holiday in Yorkshire in 1968.
Sixties Shambles – 25 linocut prints, (A5), 2020.
From a photo slide image Grandad Kirby took whilst on holiday in York in 1968. The image is reversed purposely as I recall when he would do photo slide shows he would often put them in backwards.
Either Way, 5 linocut and letterpress prints (A1), 2019.
Either way remember love. In, out, divided, united, open, closed, big, small, one, all. Technology, the past and the future could bring us together or tear us apart. Either way remember we can all love and look after each other.
Rosie, the cat that tolerates my mother, 5 A4 linocut prints, 2020.
Bonsai Family Tree 25 linocut prints, (A3), 2018
Family trees typically represent blood relatives and linage, yet many of us enjoy uniquely special relationships aside our genealogy, finding connections through often diverse moments in social place and time. Bonsai trees are cultivated and attended to by human hands that shape their form, much like the way our local friendships and urban families do too.
When the Magpie arrives good fortune will follow. (A1), Pen & Ink, 2020.
When the Magpie arrives good fortune will follow. 20 Linocut & Letterpress prints,(A5) 2020.
DWP safety knot - Cartoon for Disability Arts Online., 2020.
Greenwich Mean Time - Cartoon created for Disability Arts Online., 2020.
Fish and Crips - Cartoon for Disability Arts Online., 2020.
WCA Smartarse Speaker - Cartoon for Cartoon created for Disability Arts Online, 2020.
Care on Wheels - Cartoon for Disability News Service, 2015.

A War Against Disabled People – Audio visual summary of Chris Edwards 2012 report: ‘The Austerity War and the impoverishment of disabled people’. Words by Chris Edwards, Visuals by Stephen Lee Hodgkins. This was shown at the Shape Open exhibition in 2012/13.

Bodeelanwigch – Animation exploring the representation of dyslexia challenging language and literacy norms. Presented as an audio visual poem, the original text written by the disability activist and artist Simon Brisenden (published in ‘Poems for Perfect People’ in 1987) this piece reconsiders the themes in relation to notions of dyslexia and associated learning difficulties. This was shown at the Shape Open ‘[In]visible’ exhibition in 2014/2015.

Just a Line – This animated clip was inspired by a family collection of censored postcards from World War I sent from the trenches by my Great Great Uncle John Edward Kirby, also known as Jack to his brother, between 1915 to 1918. Drawing on the words Jack wrote whilst in the trenches, this clip presents a summary version of the postcards. Created by Stephen Lee Hodgkins and Mary Anne Northeast.

The Understated LadyBird and the Big Pale Foot. Comic poem, pdf (2017) – Tells the tale of how Rosie Noir, an understated ladybird, stood up to the big pale foot following a terrible time of being downtrodden.  Inspired by personal diversity and collective pride the story celebrates speaking up to the face, or herein the foot of oppressiveness. 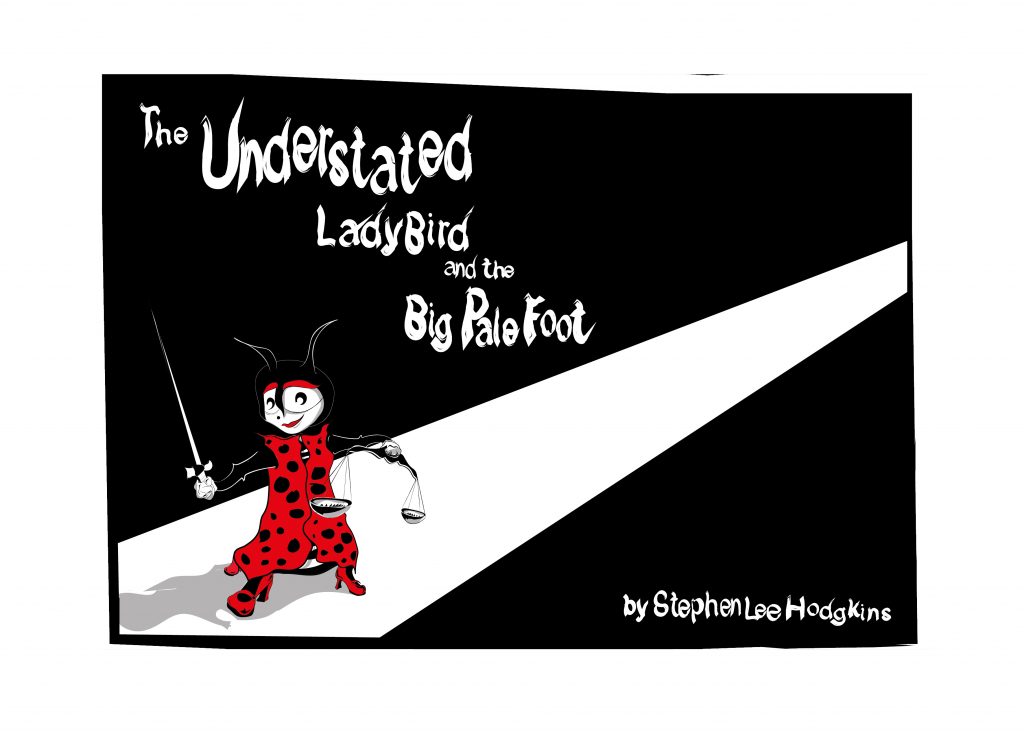